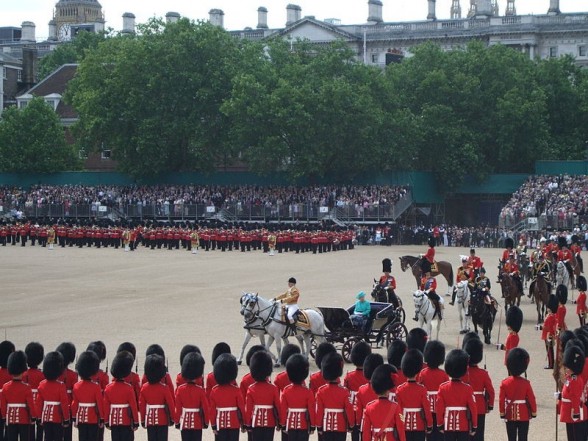 The Queen travels down The Mall from Buckingham Palace in a royal procession with a sovereign's escort of Household Cavalry (mounted troops or horse guards). After receiving a royal salute, she inspects her troops of the Household Division, both foot guards and horse guards, and the King's Troop, Royal Horse Artillery. Each year, one of the foot-guards regiments is selected to troop its colour through the ranks of guards. Then the entire Household Division assembly conducts a march past the Queen, who receives a salute from the saluting base. Parading with its guns, the King's Troop takes precedence as the mounted troops perform a walk-march and trot-past.

The music is provided by the massed bands of the foot guards and the mounted bands of the Household Cavalry, together with a Corps of Drums, and occasionally pipers, totalling approximately 400 musicians.

Returning to Buckingham Palace, the Queen watches a further march-past from outside the gates. Following a 41-gun salute by the King's Troop in Green Park, she leads theRoyal Family on to the palace balcony for a Royal Air Force flypast.

More Than Good Manners will arrange the day for you and guide you through all the Royal and Historical events of the day.

The Most Noble Order of The Garter

Honi Soit Qui Mal Y Pense
The Order of the Garter founded in 1348 by Edward 111 is the highest order of chivalry existing in England, dedicated to St George.  It is the pinnacle of the honours system in the UK and membership is limited to the sovereign, Prince of Wales and more than 24 members or companions, including the Chancellor, who at the moment is Lord Carrington but for most of its existence this post was held by the Bishop of Salisbury.
Veronica's ancestor was Bishop John Fisher, Chancellor from 1807 to 1825 and is buried in St George's chapel. Male members are called Knights Companion and the female Ladies Companion.  Descendants of the Knights of the Garter may join The Society of the Friends of St George's and Descendants of the Knights of the Garter. See below * for more information about Bishop John Fisher.

The Order of the Garter service is held at St George's Chapel Windsor and is held every June on the Monday before Royal Ascot week.  The members of the Order, wearing their ceremonial vestments and insignia, meet in the state apartments in the upper ward of Windsor Castle and form a procession led by the Military Knights of Windsor, through the castle to St George's Chapel for the service.  Every Knight is required to display a banner of his arms in the chapel together with a helmet, crest and sword and an enamelled stall plate.

Guests of More Than Good Manners will be fascinated by the pomp and pageantry of this historical event.

*Bishop Fisher served as Chaplain to George 111 and in 1786 was made Canon of St George's Chapel Windsor. He was appointed Preceptor to Princess Charlotte.  He was notable for his friendship with John Constable, presiding at Constable's wedding and commissioning "Salisbury Cathedral" now in the Frick Gallery.  He became Constable's biggest patron and was often called the "King's Fisher" in reference to his connection to the Royal Family and his patronage was a valuable asset to Constable.  He married the heiress Dorothea Scrivener of Sibton Abbey.

Known colloquially as The Games - and originating from those believed to have been held by Malcolm III - an annual Highland Games Gathering is held at Braemar on the first Saturday in September and is traditionally attended by the British Royal Family. It is held each year in the village of Braemar in Royal Deeside and invites people from all over the world " to come over the hills" to attend the Braemer Gathering and Highland Games. It is perhaps the most famous and best Highland games anywhere, and it regularly attended by members of the Royal Family. In 1746 the Act of Proscription stopped all clan gatherings, but following its repeal in 1782 the old enthusiasms for such events returned. About 1826 the Braemar Highland Society was created; the first modern-day games taking place in 1832. On the 14th September 1844 Queen Victoria attended the gathering at Invercauld. In 1866 Royal was added to Braemar Highland Society and in 1906 the Duke of Fife presented 12 acres (49,000 m2) of Mar Estate to the Society and The Princess Royal and Duke of Fife Memorial Park, the current home of the Braemar Gathering, was created.

Since Queen Victoria's time the reigning Monarch has been the patron of the Braemar Royal Highland Society.